Next week, the U.S. Senate is expected to take votes that will drastically cut and cap the Medicaid program and the home and community based services people with intellectual and developmental disabilities rely on to live independent lives. Your participation in this fight is critical. Join The Arc and other large organizations fighting this destructive legislation at a rally at the U.S. Capitol on Tuesday, July 18!

This event is called the People’s Filibuster – because Members of Congress need to hear from real people and see a groundswell of opposition to this bill.

Rally at the U.S. Capitol on Tuesday, July 18 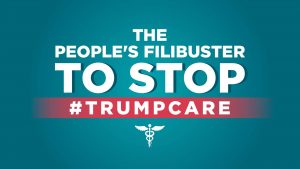 WHAT: The People’s Filibuster – Rally to Save Medicaid

WHERE: U.S. Capitol, Upper Senate Park, north side of Capitol Building. Area 2 on this map

Now is the time to show up and be counted in this fight. We hope to see you on Tuesday!